"Test 4 Echo" by Peter Watts
A cykor daesbe, tilting as if some gynar taing had kicked over a betal. 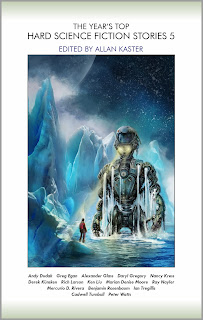 ANSWER
A rocky seabed, tilting as if some angry giant had kicked over a table.
Posted by Editor at 5:56 AM